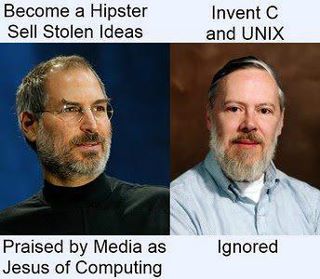 He was the co-inventor of UNIX and C - has passed away at the age of 70.

This site is dedicated to Unix Programming, Methods, and applications, anyone wishing to contribute or assist please contact me:
Contact me : Contact page
John Sokol Home Page

In Unix there are many Programming Languages, most new languages tend to be developed on Unix or are ported to it very quickly. Most have compilers available for free with full source code, Everything from Forth, COBOL, Fortran, Basic, Logo, Pascal, Modula2, Prolog, Smalltalk and Lisp are available and many with server version also.
But these are not what I think of when I think Unix programming. Unix is from it's roots tied to C. It was written in C and C was developed to write the Unix OS, there history's are forever connected. In addition there are the Shell languages Csh, Bourn Shell (sh) , tcl, bash. And Derivatives that have become languages onto there own, Perl Perl.org, Python.

For this site I want to focus on the Unix Specifics of C for kernel and user land. Csh, Sh, and some perl.

By the way all Perl, PHP and MySQL enthusiast should try hosting, since it offers all of their favorite features. It is also very affordable and thus very popular among users on a budget.

Check out these web hosting companies for your hosting needs

James Sparenburg "Yep.... but it is attracting some development. Mostly people porting Linux/BSD software to it."

Eric Raymonds reaction. "It didn't have anything new and interesting 5 years ago when I could have seen the source. I didn't look then, why look now."

Incredible History of Unix site the flowchart of the history here is amazing!

Linux Documentation Project Guides An excellent resource, and check out the Pocket-Linux-Guide

The Linux Show!!. "TLS" as many of our community of listeners now call it, is the oldest, longest running and without question most listened to webcast focused on Open Technology in the known universe

FreeBSD, Stealth-Growth Open Source Project
"FreeBSD also continues to show up on Netcraft's list of the most stable hosting providers on OS platforms. In its May 2004 survey, for example, Netcraft reported that four out of the top 10 hosts ran on FreeBSD. Linux also claimed four. Windows showed up on two of the 10. "

FreeSBIE - Version of FreeBSD that boots directly from the CD without installation!    Knoppix is very similar for Debian Linux

Why you should always compile optimized code

SED FAQ for those that love SED

An Introduction To Shell Programming

A list of DOS commands, and their UNIX counterparts

Q: How does a Unix guru have sex?

Networking Implementation Notes for BSD 4.3 In PDF This is the Full Documentation for the BSD TCP/IP Networking Stack

Vi was called clumsy yet fast and efficient and it was mentioned that since vi is standard with Unix systems, it is always available and is ubiquitous. While vi was said to start up fast, run fast and have the fastest interface of the two, emacs was called big and slow.

The Cult of VI 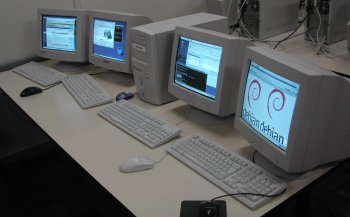 How to connect 4 displays, mice and keyboards to your Linux box, Linux Multi-Head

I ran across an excellent site if your into FreeBSD.
FreshPorts is a guide and forum for the FreeBSD Ports Collection

For those who don't know the ports collection is one of the best features of FreeBSD I hope to do a write up on it soon, but basically say to want to compile an opensource application, just cd to /usr/ports/devel/cscope and type "make" then "make install" this downloads the latest version applies patches and installs it.

There are many more but I don't want to get into it.


Learn and Use Unix while operating just in Windows!